Back in the 80’s I was a big fan of the Furs. The first four albums The Psychedelic Furs, Talk Talk Talk, Forever Now & Mirror Moves got a lot of play in cars, flats & personal cassette players. Shocking to do the math and notice this was 30 years ago.

I never saw them live during this period but they had a good following and went fairly orbital when John Hughes used ‘Pretty in Pink’ as the basis for a film. Other than that particular song they didn’t get any real chart success and never quite reached the popularity achieved by the Simple Minds at around the same time (or U2 who couldn’t have been far behind).

When I noticed a month or so ago that they were to play the eternally sticky (not a criticism, its part of the character) Rock City in Nottingham it had to be a yes.

Here’s ‘President Gas’ filmed by me using Super8 on iPhone (yes, it’s meant to look like this, it’s retro)

The venue looked a little empty when I arrived but once at the front and with the crowd surging in it felt far more comfortable and well attended.

They started out with ‘Into You Like A Train’ which was a good move and with such a great back catalogue they couldn’t  go far wrong. According to Setlist.FM the rest of the show went like this;

Richard Butler’s voice has barely changed and is still snarly and guttural. He always bore comparisons to both Bowie & Lydon but throughout this set he was very bouncy (literally)and cheerful, obviously enjoying himself. Brother Tim on bass looked like the original version of Nicky Wire prowling around and generally playing the crowd, mouthing the words and looming over the front row. Mars Williams kept the original Furs sound together with great sax playing, full of squeals & squawks and some occasional pretty clarinet work. The band these days consists of Richard Butler (vocals), Tim Butler (bass), Rich Good (guitar), Mars Williams (saxophone), Amanda Kramer (keyboards), and Paul Garisto (drums).

With recent tours in the states and more coming in Europe they are getting good reviews everywhere. They aren’t trying to promote any new music so far but they play so well together you would hope that they made it into the studio again.

Here’s another video shot by MetalheadSince1968 who was on the other side of the stage. I started to film this but the general exuberance incited by the song bounced me out of touch.

The main members of the band (like the majority of the audience) must be into their 50’s now and I can’t decide if it’s embarrassing or heartening to see that kind of moshy behaviour, especially to songs like ‘Imitation of Christ’. I would have been in my early twenties when I first found the Furs and would have not just forgiven but probably found meaning and life context in many of the lyrics. Many are lost romantic, failed love songs, party crazy, and a little social comment (was Rockets Ronnie Reagan ‘President Gas’?) straight from art school and not what you could call culturally deep. They are though visual songs and broad & illustrative but, they are just a band and these are just rock songs. The audience still had a lot of love for them, singing riotously to every chorus and lapping up the slightly clichéd but stylishly performed mime / interpretive figures Butler added to the lyrics. He pulled pirouettes, goose steps, crucifixions, that hugging/kissing girlfriend thing seen from behind and crazy in brain/twirly fingers. I wonder if these are still taught in drama schools. 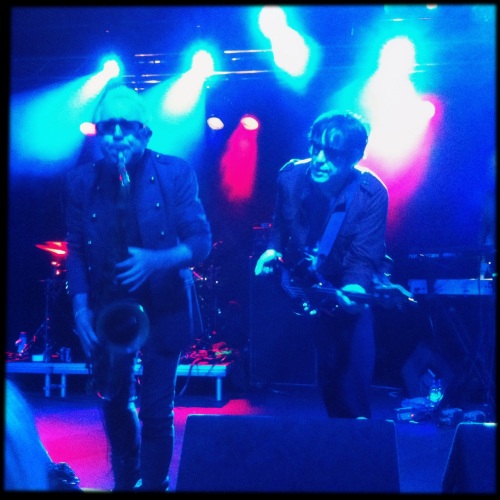 Butler reminded me of an old art school tutor I knew a long time ago. He has a lot of ‘been around’ cool going for him. He takes the songs seriously but perhaps not himself so much so as he maybe once did. He dresses well as well, very European. It was great to see him (and the rest of the band) so plainly enjoying themselves and giving their all to such a wonderful set of songs.

3 responses to “The Psychedelic Furs”