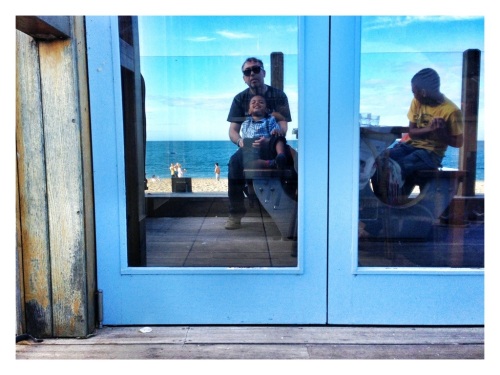 So here we are again, my rambling recollection of a beach type holiday with my offspring. This years special guest is BabyJ, his first excursion and as we only arrived at 3.00pm he’s done quite well by being the first to play the injury card, running into a metal bar precisely placed to stun a short bloke. No current evidence of concussion as the vomiting preceded the injury. We are staying in a hillside chalet settlement that seems about a third occupied (more lies and suspicions about Norton Park later). It was a late (read cheap) booking and is two miles from Dartmouth but only one mile from Sainsbury!
Homer, our dysfunctional sat-nav managed to get us to an optimistically beautiful location about 6 miles from here but at least we got the lay of the land.
As usual the boys devolved into yapping puppies when we found the nearby beach, which it turns out is one of the prettiest little places I’ve seen in a long while.
Having negotiated snappy fold down beds, hidden electrical meters, and some issues with my tolerance for perpetual jollity we are all bedding down for the evening.

My dreams always peak away from home, add to that thin curtains and waking up at 6.00am in a strange bed. Shudders…. The ghosts of Norton Park have at least retreated for the daylight hours. Here is a panorama of the River Dart to take my mind off it.

Or day one if you don’t count yesterday. Directed by the little bosses we did the ‘lazy day at the beach’. Mainly plus points on this in the event audit. 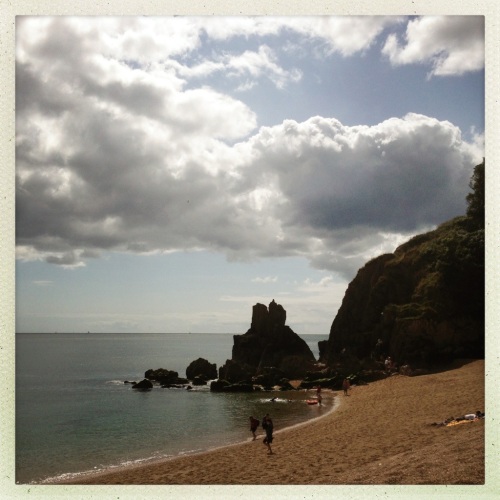 One minor potential drowning
One lost tent
£7.00 parking
No Wi-Fi

So all in all a win! 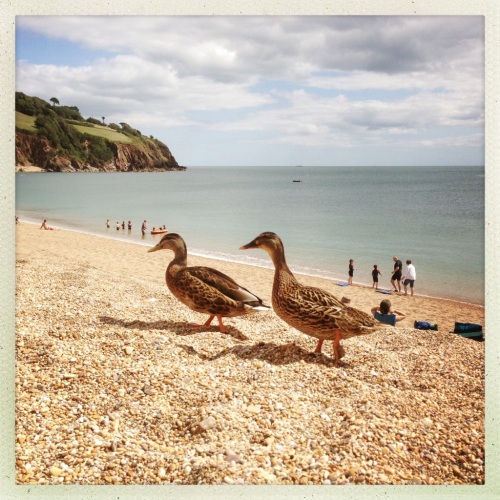 Oh yeah. …… Huge Jurassic ducks as well. The boys also took great pleasure in being put in holes and covered in stones.

There were other more regimented families that took a firmer ‘legionnaire’ style line to beach training. Each to their own I guess.

Back tomorrow with I have no idea what. I’m away to watch the Family Guy Stars Wars thing….. And the moon is out… 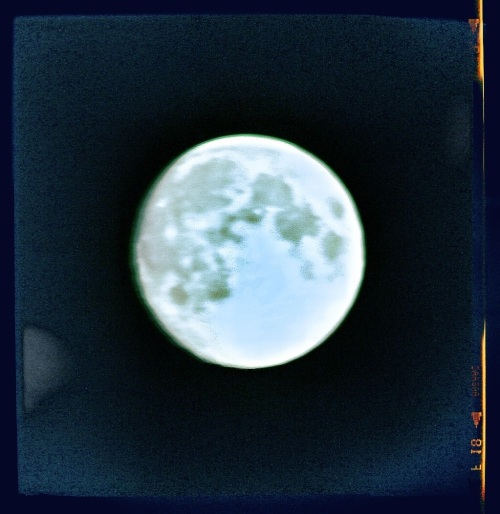 Almost forgot. After the beach we did locate the Castle. It was a bit late for a tour but the surrounding area was worth a quick look.

Or three (see above). Tiring to say the least…… Early start and into Dar’muth to reckie boat trips, then up to the Castle for a drink and then onto Sugary Cove. Another day of clement weather and good light. BabyJ did himself credit with some step yomping and rucksack carrying up and down a hundred or so stone steps. G & D are still committed to crab catching but with the harbour drops being so huge and BabyJ being a tiny air head I’m a little reluctant. So the the compromise is that tomorrow we will revisit Sugary Cove with nets and buckets for the purpose of depleting the local sea stock.

After the cove we took the boat trip which lasted getting on a couple of hours. Time flies without deadlines and email and in no time the afternoon was over and we headed back home.
Dined on fish & chips ( G had Whitebait which I would have chosen at his age). Quality was great, portions thankfully smaller than Whitby.

Pictures in non sequential order follow. The first is mainly evidence that I haven’t mislaid a child so far. 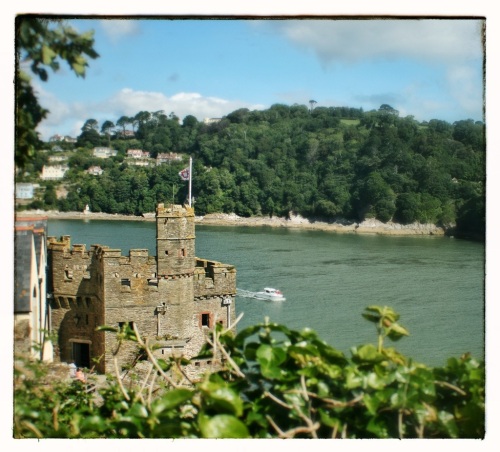 The next set are from my phone, a mixture of Hipstamatic, HDRPro and Snapseeded Panoramas.

The Consensus is that it’s Day Three

Wednesday morning we headed in to Dartmouth to buy crabbing materials at the request of the boys. We did crabbing last year in Whitby and its a cheap and entertaining sport, although not for the crabs. We then took the ferry across the river and headed to Brixham.

Brixham is much more of a working town with a lot of modern fish industry based developments. It was very busy around the old harbour and it obviously has a long history of sea faring. Walking from the car park into the town the first thing I spotted was this painting on a wall behind the trade fish market.

Further around from the market towards the Torquay Ferry are huge stacks of lobster and crab cages, the absence of people in this is just luck. 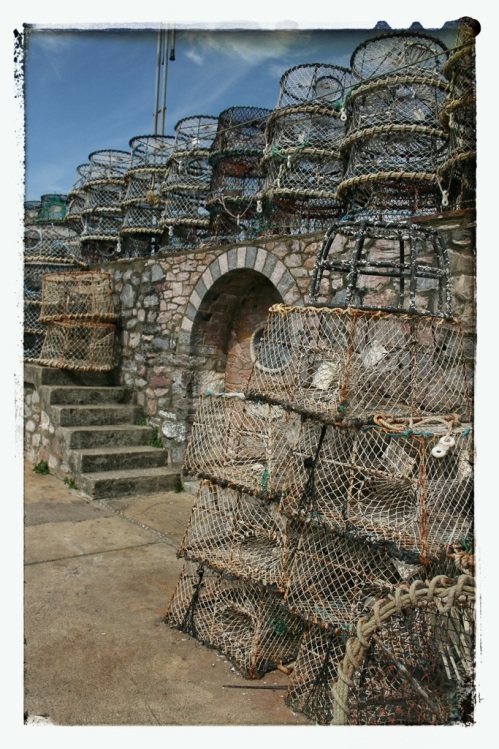 Walking further around we stopped for ice cream. I had a double cone with the collusion of coconut and lime & chilli, which was better than it sounds.

Also in the harbour is a facsimile of Golden Hind. My Tudor history is a bit flakey but if Drake took that around the world he deserves his place in it. Here’s a rare picture with me in it….. 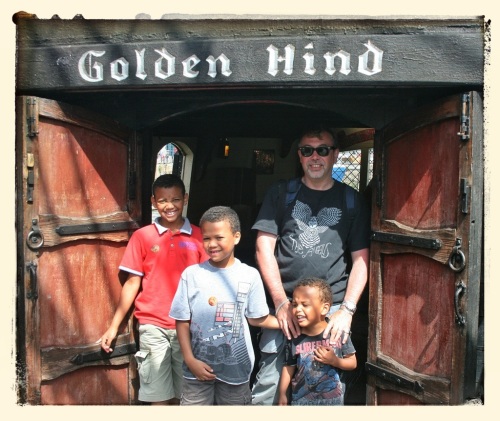 After the Hind we headed back to the harbour for some crabbing. As it was low tide we didn’t have much success so we took the division to go back to the Dart. We soon filled the bucket and although BabyJ was reluctant at first he soon got into netting the little things as G & D reeled them in. Below are some more Hipstamatic pictures from through out the day including the boys out side the Bayards Cove Inne were we went for a Tapas dinner. Worth it for soft shell crab in tempura batter alone. 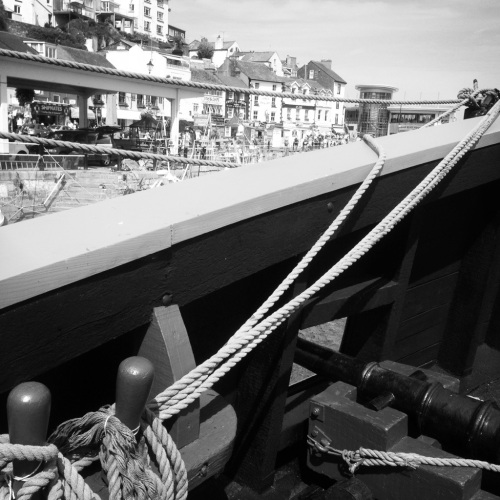 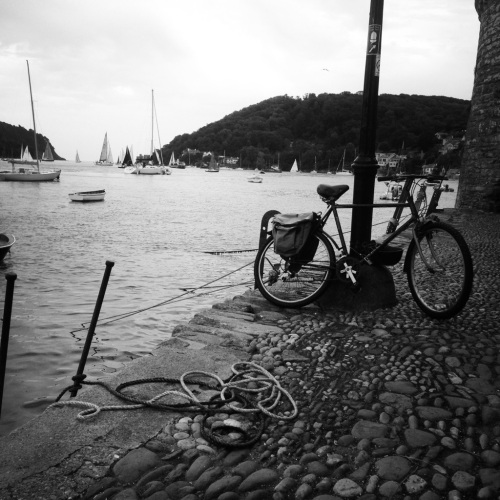 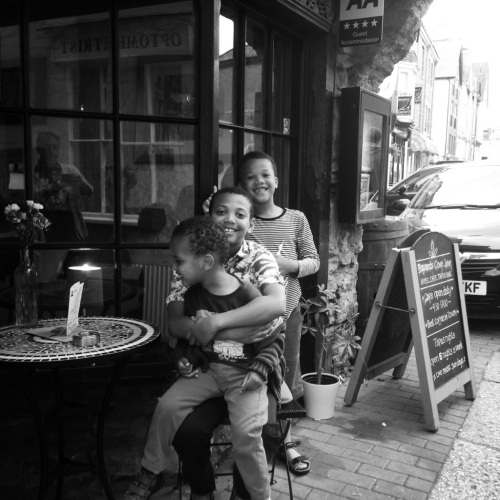 The main thing to say about today is ‘Sugary Cove’. The deal was we would go to the prime rock pooling beach near the Castle. My intention was that we would get there early and stay for around three hours. It ended up at five hours. J once again deported himself with great strength, bravery a resilience considering how short he is. While the other two disappeared into the distance J & I stayed tight and did our own exploring.

Their main pre-occupation as with most children was the persecution of small wild life. They caught a bucket full of tiny Brill fish most of which got released before suffocating in the pail.

DBoy can be the quietest but showed himself to have the greatest fortitude for slime, animal handling and consequential demise.

J really had a desire to join in but like me ends up staring at the horizon and loosing track.

We are fairly sure to return to ‘Sugary Cove’ some time tomorrow. The weather today was glorious but in any circumstance it would be a perfect and engrossing location.

In other news, later in the day we attempted cradling on the river but the crabs stole the net, a short distance away the mackerel swarmed and the fishermen filled their buckets (and the boys took interest in the adept fish slaying technique) and showing his nose/snout/beak over in midstream we saw briefly, a few times, a dolphin. Amazing…….

Here are some more phone pictures from the day.

This is a panorama from mid tide. The one below is from the cliff side.

And so the last full day. The week has gone really quickly and I would struggle to remember everything we did if not for the power of the blog. Today we went to Beesands mainly. If you have read the Keith Richards autobiography ‘Life’ (or listened to the audiobook as I did) you might remember him talking about spending some childhood summers there, and also doing one of his earliest public performances with Mick Jagger at the Cricket Inn. It’s a funny almost ageless place, the only marker of time being the increasing cost of a decent crab sandwich. I’ll let you guess a while on its current value.

Beesands is a long pebble beach that runs the edge of Start Bay, further east toward Dartmouth is Strete & Stoke. Piled on the water brake are crab and lobster nets, still made in the way and with local willow as they have been for many years.

They have a rack by the boat sheds that they hang locally caught Conga Eels on. These are dried in the salty sea air and chopped up to provide bait for the next catch. BabyJ though they were yucky. But then he thinks cheese is yucky so I don’t trust his opinion. 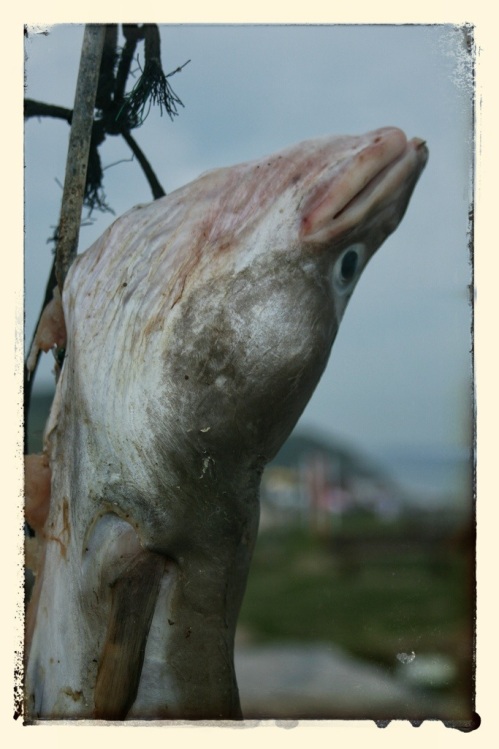 This next set of pictures are from my phone. Mainly Hipstamatic. The last on is my Cricketers purchased crab sandwich. This cost…………. 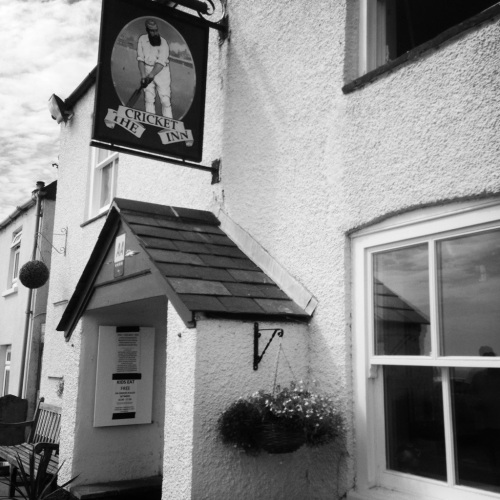 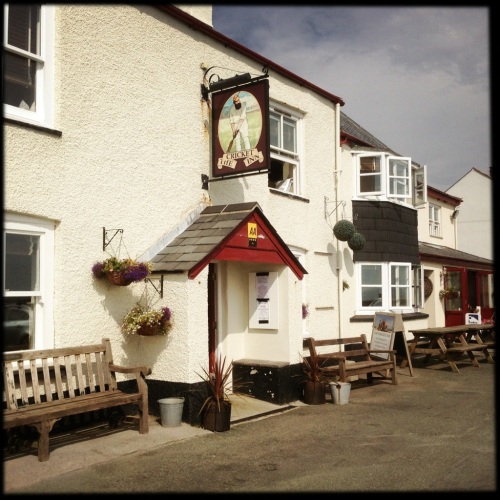 Well, that’s about it. After Beesands we went back to Sugary Cove for basic wave jumping but this was cut short when Gabriel thought he had been nipped by a crab. We then went back into town and crabbed on the river for an hour (…revenge as much as anything), then got washed and went out for dinner. Possibly fortuitously the first to nice looking places we went were fully booked the we found a local pub with decent food and they came home happy. I had my $11 crabby pattie earlier so I’m cool……..

Tomorrow morning is packing and loading before a spot of shopping and the car haul home. It been a great week and my little blokes have been great company and seem to express that they’ve had a good time. Now they owe me!

We are home. Four and half hours of motorway, the boys prevailed. I have a few final edits and additions which I’ll fly a little later. We loved Dartmouth and Devon and I hope we get to visit again soon.

For a while I’ve had in mind Dylan’s ‘Drawn Blank’, not so much as subject but more process. He hangs on the subject and relies on a good grasp of drawing but basically reworks his sketches for effect of atmosphere. These four pictures below a worked up photographs using ‘Brushes’ (recently given credibility by David Hockney). I would quite like to take some of the content further into abstraction or symbolism. The base images here are from Sugary Cove.