The Elephant in the Gallery 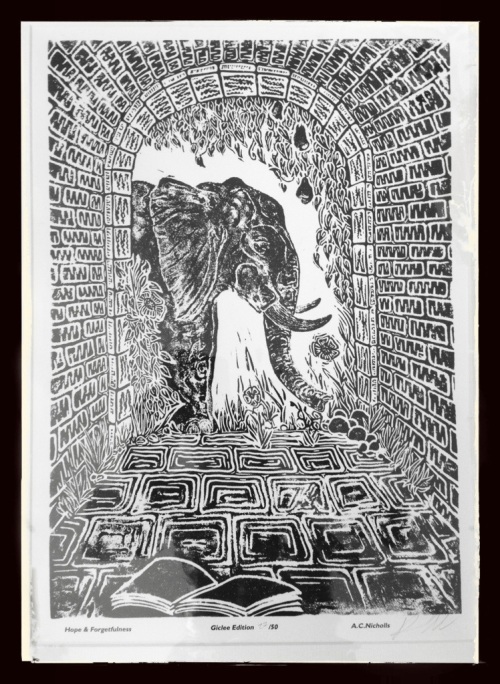 After reading Georges post on the George Thornton Gallery blog about the value of printmaking I had a world of comment gush up on me. I studied fine art and specialised in Print Making at Winchester School of Art waaaaaaay back in the eighties. I totally treasure printmaking as a beautiful alchemical process that more often than not exemplifies skills in drawing and composition that more free forms of two dimensional art dodge. There are many artists whose output in this genre at least equals their painterly production – Picasso, Goya & Bonnard spring to mind but the list far longer.

In his blog George discussed two of my favourite artists, Salvador & Bob. I admired Salvador quite a long time before I became a full blown Bobcat. Dali was an unmitigated transcendental genius. His drafting skill is beyond comprehension. He was also a master of self promotion and highly ‘brand aware’ half a century before the phrase birthed. Dali had a commercial awareness and understood his value. As a superstar artist of his generation he was subject to opportunistic fakery and this materialised in his Limited Edition Print activities. The up shot was that he signed thousands of blank sheets of paper. In doing this he undermined the value of not only the fakes but his own work but established a mystique around his work that elevated his own perceived stock.

Dylan, in a much repeated interview in the mid sixties was described by a journalist as the ‘spokesman for a generation’. Dylan’s response was ‘No, I’m just a song & dance man’ perhaps the greatest understatement of his career. Dylan must be possessed of superhuman self confidence as he has always ploughed his own path musically. Even in recent years he has mystified audiences with ‘unusual’ versions of his classic songs and extreme vocal styles. Like Dali he is utterly self aware and brand loyal. His visual output has been just as idiosyncratic and subject to criticism as is music. By any stroke he isn’t a world class draughtsman and as with his music he has been accused of plagiarism. I don’t own a ‘Bob’ but I did buy the first ‘Drawn Blank‘ book (and paid a lot more than I did for the Dali print). I admire his process and have viewed the prints with interest. Being close to the types of processes that produce works of the type that are selling the process and supply chain is very interesting. You can’t buy a ‘Bob’ for much under £1000.00. The galleries that show these (Castle Galleries/Washington Green) report high levels of sales. Margins are misty but ‘the piece of paper’ would be less than 5% of the cost in it self and the margin to the artist and his management will be clear in the chain. Personally I think they are OK prints. They are however taking relatively small original pieces and enlarging well beyond their passable scale. This is plainly because something ‘big’ has a higher value than something ‘small’.
As with any work of art the value is determined by the market. Anybody who buys a Dylan on the basis of investment should consider caveat emptor. If I had a grand lying around I would buy one, not for any potential investment but because I would like to see it when I walked passed it every day rather than having to open a book. And strangely, on consideration it probably wouldn’t matter which picture it was as long as it had that 5 square centimeter pencil signature at the bottom. Oddly I received an invite to the 2013 edition review today.

That, (and here is where it gets misty) is my point. Art is like voodoo. It’s about memory, association, faith & connection. If what you see fits your expectation and you believe it’s from the place you think it’s from you will be happy with your experience. We all like to be connected to something bigger. It marks the lamppost in our cultural neighbourhood.

…..and if you would like to buy an original limited edition giclee print from an original lino block print circa 1986 called ‘Hope & Forgetfulness’ like the one at the top I have 6 only left with no intention to make any more. £35.00 each plus postage. Make a connection. 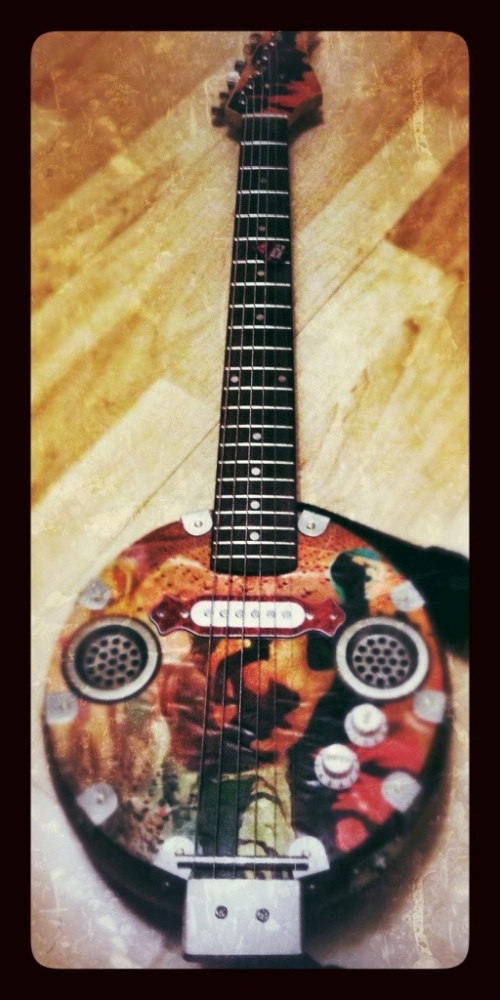 Several weeks ago I watched ‘Sound City’, Dave Grohl’s documentary about the LA recording studio that has serviced dozens of classic albums. Towards the end, Dave & Krist from Nirvana play with Paul McCartney. Macca uses a CBG which looks odd but sounds great.

I week or so later I was chatting with Chris Olley and he said that after that movie the price of a decent CBG went up from around £60 to a few hundred quid.

I had a look on EBay and found a few decent looking user made instruments. One particularly instrument caught my eye. Instead of a traditional box it had a round body, being made from an Acacia fruit bowl. It’s was finished with Jack Daniels labels and looked TDF. Unfortunately I bottled on the final bids as it closed a little under £100.

Undeterred I emailed the seller. As it transpires a retired musician living on the edge of the Peak District making instruments for enjoyment. We agreed on a new build and I had an option on finish. It was a fairly spontaneous choice evolving from the conversation but I’m pleased with the use of Salvador Dali’s Hallucinogenic Toreador as the theme.

I collected the guitar earlier in the week. Plugged in and with a little reverb, with its hard wood bowl base and resonator filters (plumbing accessories?) it has a rice deep tone. It’s has a high action but is perfectly suited it slide playing.
Metallic and ringing, full of innate noise.
As the maker pointed out, the original CBG users had crates, planks and fence wire to work with. It’s not the sound that counts, but what you do with it.

That’s my next quandary. 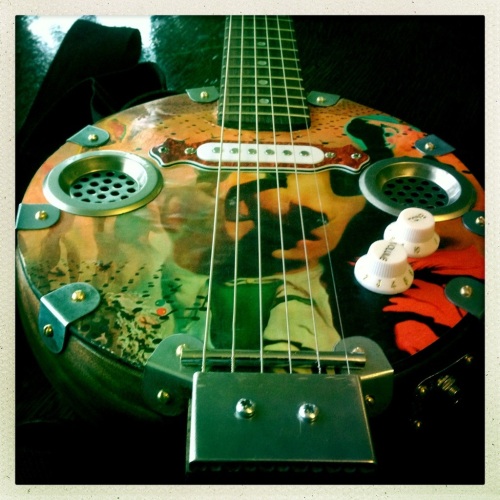 My new fave rave for 2012; with dark nights, chill air, another year of work ahead, and the challenge of growing children gnawing at my soul, is the wonderful folk gothic choral grandeur of the ‘On A Dark & Barren Land’ by Texan residents The Angelus.

Produced by Josh T. Pearson & the band, the lyrics have many religious undertones that you might expect from a God fearing state like Texas. Texas is big. Very big.  Big Land. Big Sky. Big Hats. That’s roughly the extent of my knowledge about Texas. But it does produce great musicians. And I would like to learn more. So to this end….

I spent about an hour earlier following the cognoscenti of the Denton social & cultural scene on Twitter. I’m thinking of suggesting that my current hometown (Nottingham UK) twins with Denton for a cultural exchange. In order to get the ball rolling I would ask any Dentonites to follow my Twitter account and send me some current pictures of Denton hot spots, places of interest, local heroes etc. You can leave comments here and send photos to my Gmail account, which I’ll post here to encourage a mutually beneficial cultural exchange.

There is an interesting interview with Emil on the ‘Violitionist’ website. He talks about the bands name, eschewing Buffyisms in favour of Jean-François Millet. An American art collector commissioned his painting of ‘The Angelus’, in 1857. It has a little of the American Gothic feel to it. The painting was later subject to legal ownership battles and now resides in the Musée d’Orsay, Paris and is an iconic example of the pre-Impressionist realist school.

Whilst familiar with the painting I probably have more of an association for Salvador Dali’s version.

This from Wikipedia ‘The Angelus was reproduced frequently in the 19th and 20th centuries. Salvador Dalí was fascinated by this work, and wrote an analysis of it, The Tragic Myth of The Angelus of Millet. Rather than seeing it as a work of spiritual peace, Dalí believed it held messages of repressed sexual aggression. Dalí was also of the opinion that the two figures were praying over their buried child, rather than to the Angelus. Dalí was so insistent on this fact that eventually an X-ray was done of the canvas, confirming his suspicions: the painting contains a painted-over geometric shape strikingly similar to a coffin. However, it is unclear whether Millet changed his mind on the meaning of the painting, or even if the shape actually is a coffin’

But back to the band. Again…..

This is from the Violitionist sessions. “Screaming Bloody Murder”

….and another….. “Touching Down” This ones not on the album

….and the final one “Gone Country” This is completely wonderful…..

The album can be bought from the bands website. If you get a lovely physical copy sent direct from Denton Tx you also get the digital download whilst you wait. Emil kindly also sent me a digital booklet with some really beautiful illustrations and the song lyrics. Very lovely stuff and he’s obviously a very skilled artist visually as well as musically.

You can get the audio of the songs from the Violitionist Sessions here as well, by kind permission of Emil.

I hope the band does well. The music is just beyond describable. The folk & choral aspects will probably resonate with UK ears and I’m sure live shows would find some really attentive audiences.