The following is reposted from my Glove of Bones page and illustrates some recent visual work.

I hope you find something of interest here.

I recently produced a set of images which started with screen grabs from ‘Glove of Bones’ film which you can enjoy all over again HERE.

These had a certain degree of random selection, having taken 20 or so across the four main sections of the film they were whittled down into a set that had some visual connection but as stand alone items appeared fairly abstracted. Taking their source and shape they were allocated the a shape designation which lead into the digital Lino Cut accompanying image. 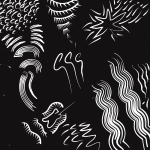 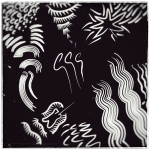 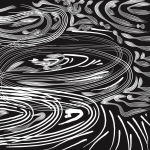 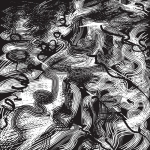 These were then ordered and conjoined with drawn & collaged elements over the top of large digitally printed base images.

There is no particular narrative and the naming is really no different from descriptors one might use when making a sound peace, quieter, scratchy, more bass, etc and I’ve built the pieces in the same process/structure as I would if building four sounds that were intended to be heard in sequence. Of course aspects of self, personality and approach work their way under the skin of the pieces.

The final pieces have been scanned and digitally reproduces as art prints on Hahnemuhle Photo Rag paper. The prints can be reordered, moving No1 to position 4 for example without destroying the continuity.