A couple of weeks ago I took the boys to Newstead Abbey which is about 20 minutes from our home, near Ravenshead & Newstead Village. We have been there on many occasions but it was a sunny day with time to kill and also the ‘Big Day Out’, an annual City Council run event that offers free entrance to various museums and other attractions.

Newstead has extensive grounds and play areas for the boys, a huge lake and waterfall features and a very well run main building with museum and café.

Whilst I took a lot of pictures on my DSLR and filmed some slo-mo water on my phone, I’m more pleased by the B/W images shot on a Holga using 120 Ilford Pan Plus film. On this occasion I’ve only made one over-layed panorama, the others are single frames that show tree’s in blossom and some wire frame sculptures that sit in the formal walled gardens. Pan plus is a slow film perhaps better suited to a tripod and good light. The images are shakey but full of tone. There is only minmal post processing of these after being scanned. 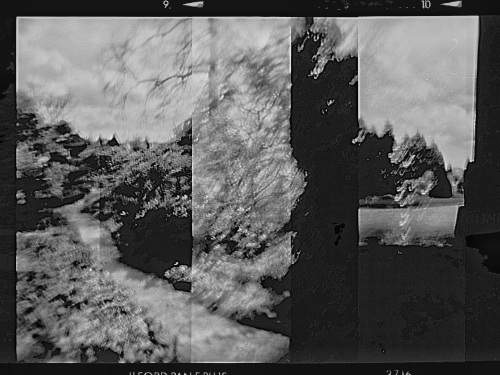 The seems to be a proposal to develop Newstead in a similar way to Chatsworth House which uses the grounds and other feature to display a range of contemporary arts pieces. Newstead would be a perfect site this given its history and landscape. Click on the images below to open the gallery view. 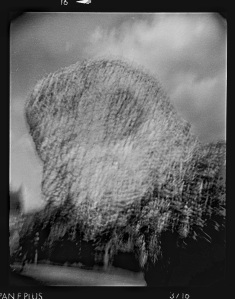 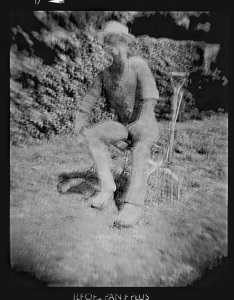 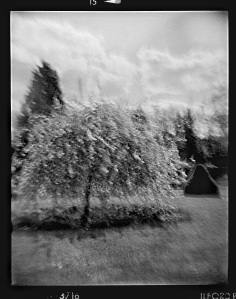 On show at the time we visited and in the main Drawing Room was a piece by Nottingham artist Tristram Aver titled ‘And Stand A Ruin Amidst Ruins’. The multiple panel screen references Newstead artefacts from wall papers, period portraits, local flora and hunting trophies. I hope the plans for the Abbey produce more thoughtful site specific pieces of this type. Below is a panoramic shot of the Drawing Room and the piece which is on display until the 5th of July.

As well as taking more than a few photographs I also managed to get a number of sound recordings which will end up in whatever new musical piece materialises this year. The piece ‘Sea Song’ that I made last year features the waterfall from the lake and other images around the grounds.

More about the ‘Sea Song’ piece here. and the bigger piece that contains it here.

Thanks to Photo Parlour, Nottingham for film processing, analog love in a digital age. 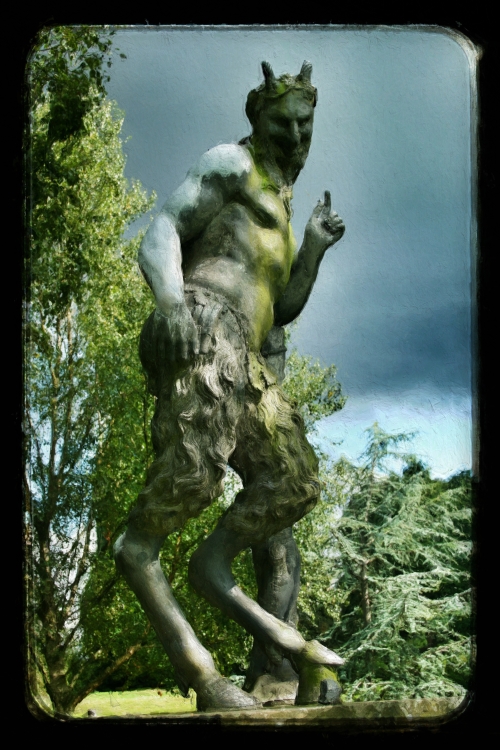 A mid week addition. Racing towards a conclusion, maybe only moths (sic) away. This piece use a number of elements unique to it. It was some African Drum played by my good wife @f1fanwmm. It also has random drum tapping from the small boy BabyJ. Dominant however is the ‘Speak It’ rendition of an excerpt from ‘The Triumph of Life‘ by Percy Bysshe Shelly.

Chris Olley put out a spoken word /poetry album last year that used the app ‘Speak It’ and I confess to totally stealing that idea. Lost for words I went straight to the ‘ThePoetryApp’ and picked, copied and pasted and excerpt from the poem by Shelly (included below).

I’m pleased by the outcome in that it has a very different quality from the previous tracks but still sounds as if it’s been grown in the same ground. The image above is from Newstead Abbey, home of Byron. and local to me. The whole ‘wild savage music’ notion that was on my mind is for me very Byronic in the same way that Byron is very Panic.

This is the video. Made during the day in between domestic duties using my home animation studio….pictured here…

This is not quite in a finished state but I’m pleased with the the intent and and the result overall. Drawing is above all intent over interpretation. I could practice more and make things far more representational but lacking in life. Despite the million drawings I’ve done before, this feels like an early step.

Once upon a time I read quite a lot of poetry. Poetry needs books, paper, silence, slowness, passion, lust. Totally unsuited to modern life, unfortunately.

The Triumph of Life