In 1978, aged 13, like many other teenage boys, I saw this on Top of the Pops and realised there was more to life than Action Man & Marvel Comics.

That was pretty much it. I’ve been a KB fanboy ever since. There are acres of journalism and comment and only a small handful of albums. With huge gaps between albums, closer to zero live performances she has maintained artistic freedom and kept a huge army of fans hanging on every note & missive for the over 30 years.

There has been a recent release (Directors Cut) which hasn’t had the best reviews. This is a rework of tracks from ‘The Sensual World’ and ‘The Red Shoes’, the last of the first season of albums. I’ve been listening to this most of the week and I’m cool with it. It would be great if it was all new but many of the new versions are beautiful and sparkle with care for the originals. the only track I don’t quite get is the final one, Rubber Band Girl, which whilst it had the potential to give the Stones a riff run for their money is muddily produced and flat.

I loved both of the original albums as they used some great guest musicians including Dave Gilmour, Jeff Beck, Prince, Trio Bulgarka, John Giblin, Eric Clapton and many of the original musicians from the first three albums. If you get the Directors Cut, get the box set with the remixes. I only have vinyl from the first time round so it’s worth it.

It was only a year ago I discovered ‘Line, Cross, Curve’ which was made for the Red Shoes album. It’s a triumph of artist integrity over viable commercialism ad whilst the music has aged well, this probably hasnt.

I was very lucky in that I had a ticket to see Peter Gabriel on the ‘So’ tour at Earls Court. A friend had seen the show a few days earlier and when the duet song ‘Don’t Give Up’ was played Peter did it solo. The stage at Earls Court was mainly based on Lighting effects but had a huge stairway at the center. Peter started the song sitting on the bottom step with glitter ball speckles around him. When the Kate vocal chorus came around a light hit the top step and she emerged, barefoot, in jeans and white blouse to sing her part. I pretty much don’t remember anything else. You can tell by the sound the crowd was impressed.

I can’t find a video of it but it sounded like this…..

If I recall with any accuracy she came back on stage for the finale of ‘In Your Eyes’ with Youssa N’Dour. It was the best gig I have ever seen, and I’ve been to several.

So with such a small number of albums and even fewer live shows, bootlegs are scarce. I’ve got a few but the quality overall is pretty poor. The only one worth sharing is a brief set from Amsterdam in 1979.

I’m not aware that any of these tracks have been officially released. I am happy to remove the link on request if required. 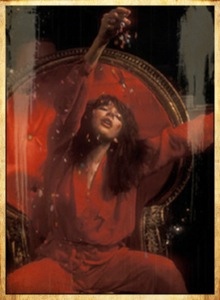 Just to finish, this song was a ‘B’ side somewhere along the line and I don’t know why. It still gives me the big shivers. Utterly wonderful.