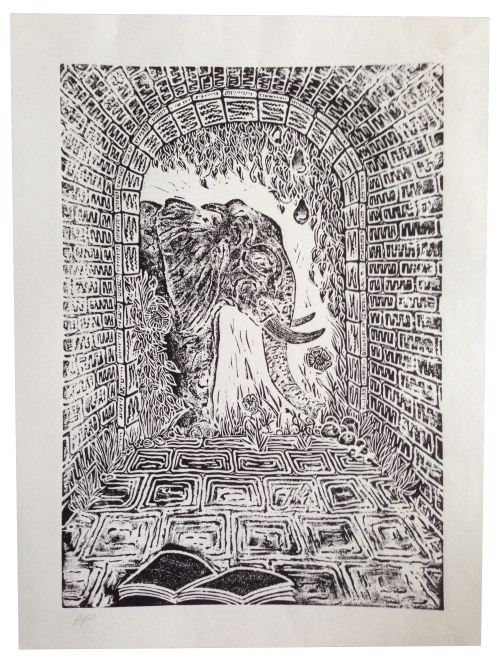 With some recent down time due to summer holiday child maintenance I took a rare visit to the loft and dug out some old artwork. Whilst I didn’t get to any of the large-scale pieces I did find some books and some mid sized prints. There are etching, litho graphs and screen prints amongst the hauls but all of the following use probably my favourite print making medium, the lino (or linoleum) block print. There nothing like the smell of a warm piece of lino and the buttery smooth cut you can get with a sharp cutting tool. Its an unforgiving and graphic medium, if you over shoot a line you can’t go backwards. I’ve been burnt, stabbed, developed rashes and caused myself tennis elbow through lino block printing – almost all worth it. I’m a bit lax on dates so unless they are noted on the prints its a guess at best.

The image at the top is the one I sold the most of. These come from 1994 approx when I lived in Crouch End. The elephant is the central image of triptych, the full sequence is below. The elephant is seen through a tunnel which was in Riversley Park in Nuneaton, the left hand panel is Crouch End Broadway and the the right hand panel is Ferdinand & Imelda Marcos in Mornington Cresent Underground. The piece was called ‘Hope & Forgetfulness’. These were made outside of a proper studio – kitchen table – homespun work.

The next piece is a diptych from around 1985, made at Winchester School of Art. This is called ‘Phototropism’s’ and reflects an interest in comparative religion & Jungian psychology. A lot of the work I did at this time had a fairly sexual content, this is less overt than a lot of my other pieces.

The next ones are from slightly before the one above and are called ‘Hydrotropism’s’. These use more African/Haitian voodoo motifs & masks, they are less skilled in some ways and quite flat & graphic with the activities of the characters buried in the pattern. Not quite self censorship but definitely game playing. 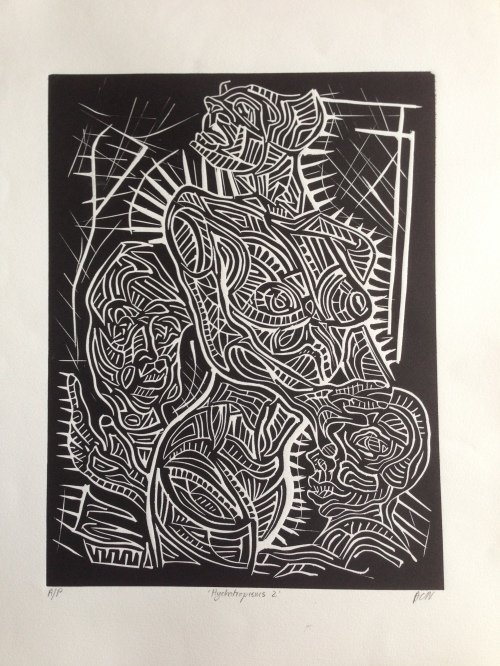 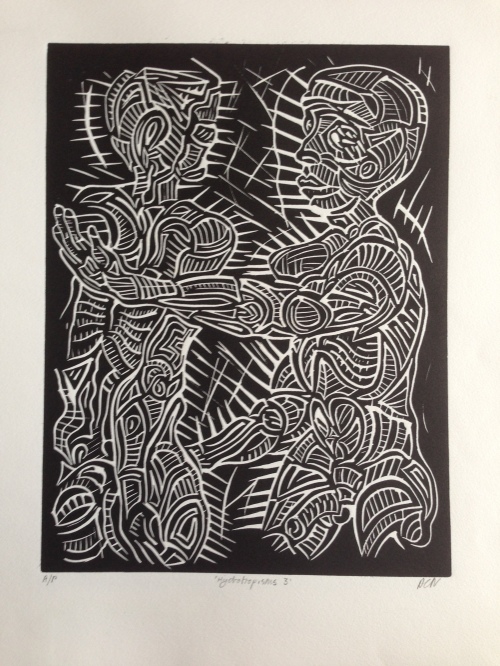 I did make another image called ‘Geotropism’. This was a single image. Unfortunately I haven’t found that one yet. As I recall it also used a Voodoo Zombie theme.

The next image I much later and probably one of the last lino prints I made. This is from 1994/5 and produced when I lived in Forest Fields. Its a slightly biographic / partly symbolist narrative played out amongst the Goose Fair and the carousel rides. Its called ‘Fairground Deception’. I alms produce a set of small images (24 I think) called ‘Nocturne’ around the same period which again I’m yet to find.

The last set of images in this post are from around 1991/92. This was a book project that uses a reverie set set on the Northern Line between Highgate & Morden. At the time I lived in Muswell Hill and went to Wimbledon School of Art – so I spent a lot of time on that line. The book was called ‘Re-Orientation/A Documentary – A Documentary/Re-Orientation’ and was designed to be ‘read’ from either the front or the back. Seen here in Gif format running from front to back.

The final images in this post are also from my time in London. These are small prints made as cards for a small gallery in Highgate. The images are stone carvings from Highgate Cemetery which at that time was mainly gated off from public access and very overgrown. 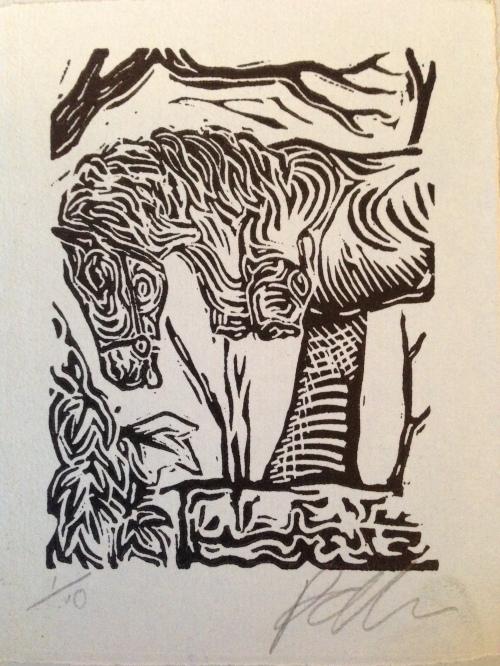 As above I have many more images to share here but as a start these are representative of a particular style and process that always gave me some satisfaction to produce. I hope you like them.