Bad The John Boy and other nightmares

I love artefacts, real things, made with care and intent. Yesterday I collected a special delivery parcel from the Post Office, incoming from Stateside. This limited edition release is a track not included on the recent The Big Dream album by David Lynch. Its a way in from left field electro noise filtered piece of Lynchian nightmare soundscape. Release by Sacred Bones Records from NYC, USofA.

On the heels of David Lynch’s hugely successful sophomore full length, The Big Dream, comes a very limited edition 12-inch, “Bad the John Boy.” While technically this track qualifies as a non-album or bonus track, Dean Hurley, Lynch’s producer had this to say about the song: “it wasn’t really recorded with the LP in mind, but it was done around the end of last year when the bulk of the album was being made. It was earmarked for something else entirely, but that thing didn’t happen in a way that required the song… so up until now, it was ‘a song with no home.’ ”

Complimenting Lynch’s left-of-center A-side, the B-side proudly features a Venetian Snares remix of the album’s title track. Despite the fact that Canadian electronic musician Aaron Funk has been known for reinventing breakcore, with this remix he breathes a completely new approach into the song, turning it into something far from your typical dance remix. Hurley describes this track as, “music for the end crawl of a bootlegged sci-fi/horror film that you borrowed from your friend’s older brother and caused you to realize for the first time that you were actually scared in broad daylight.” 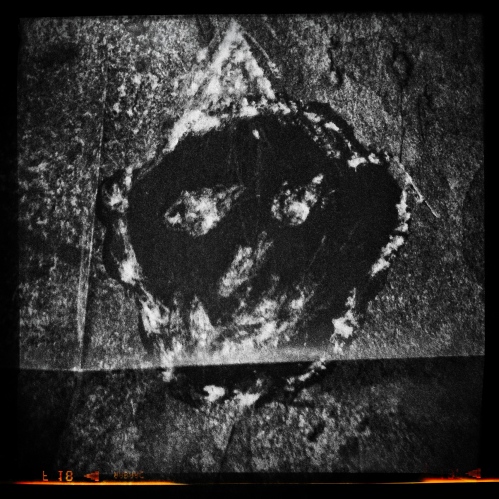 Everything from Lynch is stamped with strange including the scratched on the wall artwork used as cover art. Hang on to your chair and turn up the bass.

The B-Side is a remix of the title song from the album.

One of my favourite albums from the past year. There is a lot of lamenting that Lynch isn’t making movies at the moment but his musical out (Crazy Clown Time, The Foxbat Strategies, BlueBob) are unique and strange. He has recently exhibited paintings, prints and drawings as well as opening a night club in Paris. Also worth investigating on a dark night is ‘Rabbits’, a follow on from Inland Empire.  This has a anxiety filled soundscape similar to the white noise that makes Eraserhead such a tense experience.

…and if you can make it through that then Hotel Room is walk in the park (part from the violence and psychosis). A truly scary performance from Harry Dean Stanton in the first episode.

“Hotel Room was a three episode 1993 HBO television series produced by David Lynch (who directed two of them). Each drama takes place in the same New York City hotel room (number 603 of the Railroad Hotel) at different times (1969, 1992, and 1936, respectively). This is all three episodes back to back.”

NSFW or those of a nervous disposition and with a propensity to get offended.

One response to “Bad The John Boy and other nightmares”